Los Angeles: Today, UNITE HERE Local 11 released a report outlining its vision for what the 2028 Olympic Games could look like for workers and residents of Los Angeles as the city council is set to vote in the coming weeks on a games agreement. The city plans to enter into the Olympic Games Agreement with the United States Olympic and Paralympic Committee and LA28, the private nonprofit responsible for the 2028 Games, by November 1. Despite multiple public records requests by UNITE HERE Local 11, no details of what is actually in the agreement have been made public.

The 32,000 members of UNITE HERE Local 11 assert that the professional tourism workers who will make these events successful must be among those who benefit from these decisions. The Olympics Games must succeed in three key areas:

Good hospitality jobs: For the Olympics to benefit our communities, we need to ensure that the workers whose labor will make the Games possible have good, family-sustaining jobs.

“The stadiums and event centers that host the Olympic athletes and guests are our stadiums, and they need to provide people with good jobs that give us a fighting chance for a better life,” said Ana Diaz, member of UNITE HERE Local 11 and food service worker at Banc of California Stadium.

Hiring and retention of Black workers: There must be a commitment to ensuring that more Black workers—who have historically been excluded from the hospitality industry and its best positions—are hired and retained.

“The Olympics can make it harder for African Americans in the hospitality industry, or it can be an opportunity to protect existing Black workers’ jobs and create a pipeline for good jobs for Black workers in Los Angeles,” said Chris Smith, a bartender at SoFi Stadium and the Anaheim Convention Center.

End the housing crisis: With Los Angeles facing an unprecedented housing crisis, the Olympics can exacerbate this problem, by converting housing into short-term rentals (STRs) through its official partnership with Airbnb, or it can protect existing renters and meaningfully contribute to affordable housing production.

“The longer I’ve lived in LA, the more expensive it has become. I lived on the West Side for many years but because of how expensive rent is, my daughter and I have had to move further and further away from LAX. Now I live in Compton in a converted garage with no kitchen. I spend almost three hours every day getting to and from work because I rely on public transportation. People like me who are the backbone of the airport deserve to be able to afford to live near where we work,” said Laura Banuet, member of UNITE HERE Local 11 and food service worker at LAX since 2016. Similar agreements for past Olympics have contained detailed descriptions of each entity’s obligations, including police budgets and the rights of corporate sponsors. As outlined in Local 11’s report, the Olympics in London, Rio de Janeiro, and Tokyo caused gentrification and further displaced thousands of residents from their homes to make way for the Games. “The decision making must not only be transparent, but we need to be at the table. The Olympic Games are a once-in-a-generation opportunity to transform our industry and our city. If the Olympics are to benefit our communities, the workers whose labor will make the Games possible must have family-sustaining jobs,” said Kurt Petersen, co-president of UNITE HERE Local 11. Those who live near and work at the airport say development must better address job quality, healthcare, pollution, and displacement LOS ANGELES–Dozens of LAX airport workers from in-terminal concessions and retail, guest services, and airline catering demonstrated against airport expansion Thursday as the Board of Airport Commissioners voted to certify an environmental report that moves the development process forward.

Los Angeles World Airports and the Los Angeles City Council are seeking to rapidly expand LAX amid projected ongoing growth in air traffic and infrastructure needed to host the 2028 Olympic and Paralympic Games.

But thousands of workers throughout the airport—members of UNITE HERE Local 11 working in food service and retail positions and of SEIU-USWW working in janitorial and passenger services—point to issues that are still not addressed. “Even though I work at LAX, I will fight this airport expansion if it’s just going to get us more of the same,” said Rosio Narez, a member of UNITE HERE Local 11 who lives in Inglewood. “Almost everyone in my family has asthma, and I was hospitalized for my asthma as a kid. Increased air traffic will increase air pollution and make families like mine more vulnerable to respiratory diseases. My entire family got COVID, and the communities around the airport have been some of the hardest-hit. We can’t ignore these issues.”

“I oppose this expansion because the airport has not done enough to ensure that we— the people who work at LAX—can get by,” said Laura Banuett, who has worked as a fast food attendant at the airport since 2016. “Rent is so expensive. I’ve had to move further and further away and now live in Compton, raising my daughter on my own while living in a converted garage with no bathroom and no kitchen. I spend almost three hours on public transportation every day to get to and from work. It can’t keep going on like this.”

“Southern California hospitality and service workers are moving from a devastating fight to stay healthy and housed during the pandemic to preparing for the world’s largest tourism events,” said Robin Rodriguez, organizing director at UNITE HERE Local 11. “City leaders face a series of votes that will affect the everyday lives of these families for decades. We want their decisions—about job quality, access to affordable healthcare, pollution, and noise—to demonstrate the value of our work as ‘essential’ in a time of economic growth as well as in a time of crisis.” The LAX Airfield and Terminal Modernization is a massive project to construct Concourse 0 and Terminal 9, add more than two dozen gates, and reconfigure runways and taxiways, among other changes.

Data from LAWA demonstrates that 78% of domestic passenger traffic recovered in July 2021 compared to July 2019—the strongest performance since the pandemic began.

UNITE HERE Local 11 is a labor union representing over 32,000 hospitality workers in Southern California and Arizona who work in hotels, restaurants, universities, convention centers and airports. 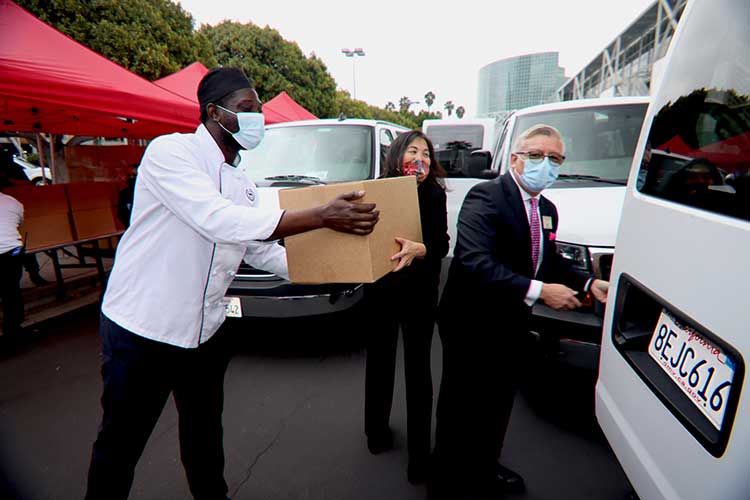 Since the beginning of the pandemic, the program has employed 1,100 union and non-union workers in the hospitality, food service and taxi industries who were laid off due to the pandemic. With funding primarily from the City of Los Angeles and County of Los Angeles, the three million meals have served 10,000 homebound seniors, people experiencing homelessness and low-income families. 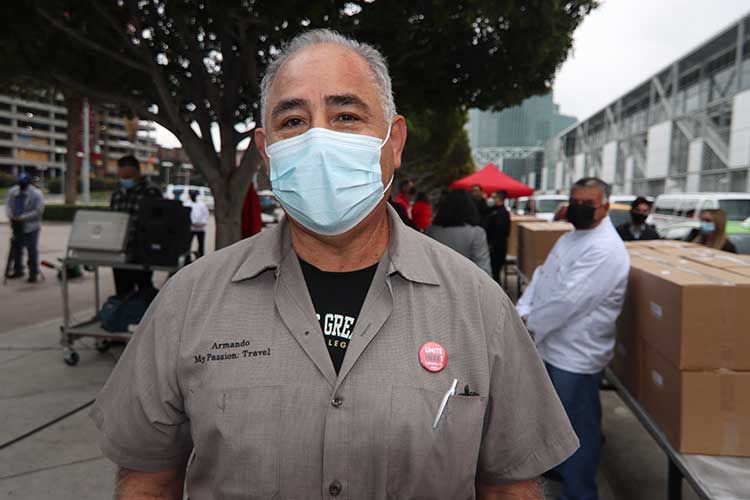 These meals are cooked in the industrial kitchens at Levy Restaurants at the Los Angeles Convention Center, JW Marriott LA LIVE, The Westin Bonaventure Hotel & Suites, Sheraton Park Hotel at the Anaheim Resort, Pomona College, Sheraton Grand LA and The Beverly Hilton, and then delivered by taxi cabs and airport shuttles. Eric Garcetti, Mayor of the City of Los Angeles

“COVID-19 has posed unprecedented and unpredictable challenges across our communities, but it’s also shown us the true meaning of the Angeleno spirit — a collection of compassionate, generous, determined individuals ready to step up and support our seniors and our neighbors in need. Progress is made through partnerships, and the City is proud to work hand-in-hand with UNITE HERE, the Hospitality Training Academy, and the Serving Our Community program to create jobs for our hospitality workforce and deliver high-quality meals to our hardest-hit residents throughout this pandemic.”